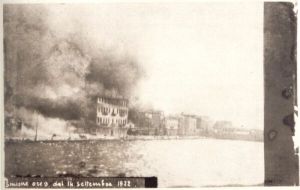 Have you ever thought about what it would be like to get up in the middle of a book store and just stab someone repeatedly in the windpipe? No? Well, never mind. Back to what I was saying.

My name is Chris. That’s not my real name. I could tell you my real name, but then I would have to kill you. That’s not cliché. It’s the truth. That’s kind of what I do. Not that it’s a bad thing. It’s sanctioned where I come from. The land of Id. The land of blood and daisies. Of tricky window Saturdays.

What? You’ve never heard of – that’s right, never mind. I forgot for a second. You guys think this is all made up? Right? Fine, whatever. You asked. I’m telling. You want the whole thing at once or do you want to pull off at a rest stop?

Okay. Then. Tricky window Saturdays. There’s the crews, all colors, all brands, you know, and they take the hoppers to the burnouts and – hoppers? There the fidgety ones wanna hop from place to place. They always think the grass is greener, you know? But borders are borders for a reason, right? So they – oh, yeah the crews. They’re the ones with the most guns or the most food or the most water, depending on where you are. Course, most guns usually equals most food, you know?

And they take ‘em in the buildings and light some fires at midnight and everybody stands down on the streets and looks down the blocks and waits. Yeah. They just wait. And then they hand out guns, sometimes one, sometimes 50, and they cock ‘em and wait. There’s these cooking grills, grated little splices of crisscross metal, rusted and clamped to the underside of the window. Got the wood underneath and burning white. The grill’s all red. The people are silent. Guns raised.

I seen people piss themselves without moving the gun an inch. Didn’t want to miss, you know. And then out of the blue, they shoot out from the windows like flying fish. Hands always tied behind their backs, and the guns fire away, concrete chunks flying, embers disintegrating, Hoppers flailing or going limp, the crews shooting off fireworks and the music bumping, sometimes country or something jazzy for contrast, and a few always make it, landing on the molten grate, skin sticking to it, with their teeth clamping down wildly on a bone or flank and reeling all awkward to their knees before launching backward, food in jowls, to disappear and fall back inside the burnout’s window.

Can I have a glass of water? What are they after? Food, dude. There’s not a lot of it, you know? Maybe you don’t. Maybe you really don’t. What year did you say it was? Huh. Yeah, right. Right. Are you with Chris? Yeah, the Church of Chris. I don’t think so brother. The crews speak the word and the word is. I’m not letting a letter take me down. Right?

Thanks. I’m really thirsty. Holy Chris, this is clear. Where’d you get this? Really? What year did you say it was again? Wow. Okay. So what else, man. Wait a minute, you guys ain’t crew. That just hit me, man. You guys can’t be crew. Crew knows everything about everybody. Scourge of the data. You guys, you guys look confused, man.

Yeah. I’ll state it as clear as I did the first time. My name is not Chris and I’m a carrier in the Hot Zone.

I already told you. Carrier’s carry. Pestilence incarnate. We deal in specific deaths. Mine is unique.

Can’t say, less you want me kill you two and everybody listening? Then it wouldn’t do much good to know, now would it? Yes, sir. Even the ones behind the listening glass. Say, you ever just wonder what it would be like to drive head on into a car on the other side of the lane? No? Well, okay, where were we?

The Hot Zone is where everything’s on fire. No reference points. Boiling, scattering, flaying, Napoleons.

How are you losing me? We’ve been over this already. Are the recorders not working? Do you people have those? Okay.

About here and now? All the books were rewritten by Chris in 6000. So not much. Just a little worrisome though. What? Well . . . suppose you’re telling me the truth? And? And it’s been about 6000 years since now in my Now. And it don’t seem like a lot has changed, that’s all. Just more fire and less green. Something doesn’t seem right with it. And how’d you say you found me again? Passed out in a church? On fire, yeah, that’s right, on fire. No, I didn’t set it. I’m not a Burner. Carrier. I told you already. Fire is not my specialty. Are you serious? I don’t think you really want to do this. I know your partner’s outside the room and behind the window, but that doesn’t mean he’s safe. All witnesses go, it spreads like that. You observe it and the wave function – it spreads, non-local, distance means nothing.

Locked up? Why? I didn’t set it on fire. What? For how long?

This is bullshit. Okay then. What’s the chain cycle? I mean you’re watching me, here, now, and whoever’s watching us on the other side of the window, that’s second level, and then whoever’s watching them, like a tree you see? Where does the tree stop? So that’s it? Three of you? Fine.

What are you afraid of? I said, what are you afraid of? Mice? You’re lying. I bit my tongue. Why? To get the blood, you need blood for everything. No, really. Mizion Seuzye paktche. Huh? Just a key. Like encryption stuff. Bloriddin pluragrir. You guys encrypt things here? Code? What’s that? Noriem jzestifer munhywella. It’s really not that funny. Krystoun vhallestia. That’s okay. See, I knew you were lying. I can tell by now just from talking to most people for a few minutes. Yeah. They’re real to you guys. Ever see snakes that fast? Spiders that small? Can’t stop it, not now. No. I just can’t. So, shoot me. Try to shoot all of them. Won’t do any good. If you’ll stop panicking, you might can get to the door. They’re not biting me because they came from me. You don’t bite the hand – no, begging is just – you’re just feeding it by begging and whatever you do, don’t pray. Do that and they find the path inside your head and file in. they’ll close it up and you’ll never get there.

Chris, this is boring. Chained to a desk 6000 years ago. No one around but Deads.

What happened? You’re all dead now. Yes you are. Look at your skin. Screaming won’t help. Well, I told you it wasn’t that funny. Fix it? I don’t know. We could go back to where you found me and see if we can get back in? In the Hot Zone. I must have slipped out somehow. Well, you can walk around dead here or walk around dead there, doesn’t matter to me.