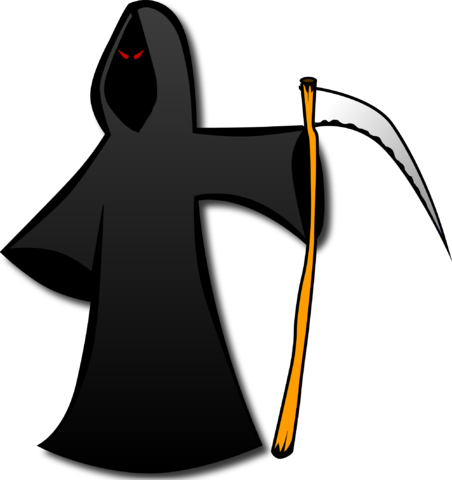 Death walked amongst the tombstones in no particular hurry. His cloven feet had been specially fitted only a week ago, but now his shoes were rubbing. He should have broken them in. No use in whining about it now.

He looked down at his legs. As it turned out, duct tape did not fix everything. His flesh was still strung together haphazardly, with the bones exposed and shinning a bright white here and there. No matter how many times a day he ate, no matter how many plates of Burrito Supremes with extra beans he put down, no matter how much he lie around and took whole weeks off at a time (in which no one on Earth died, not that anyone noticed) he was still skin and bones. Literally. Still, after hanging out with Famine for a few days last spring, he couldn’t really complain. He was a pot-bellied pig compared to Famine.

Reaching his boney hands into a small, black sackcloth, Death grabbed a vial. It was about the size of a baby turtle minus the shell. Never seen a turtle without its shell? Never mind, it’s a little underwhelming anyway. To better explain, it was about the size of an Argentinian, three toed sloth in its twelfth week of gestation. Give or take a few ounces.

As Death glided silently through the dew-ridden grass and past numerous fake flower arrangements, he uncorked the vial. Maybe that’s a misnomer. It wasn’t a cork that was holding things inside the vial; it was actually the souls of one thousand and four Billy goats born on a summer’s solstice. Cork, you see, is slightly porous over millennia, and the souls of Billy goats are not.

The nubby carpals held slightly over the opening while those souls scattered in all directions with a panic that was devoid of any real purpose. Every so often, one of the souls would come across a train or screaming child and the goat soul would suddenly go stiff and fall over. This is because they were fainting goats in their past lives. Old habits die hard. At any rate, no one living noticed, and after a few seconds the goat souls hopped back up and continued on with their panicked travels.

There were only four million, seven hundred forty six thousand, nine hundred eighty eight drops, so he would have to choose carefully. It sounds like plenty, but there are a huge, huge amount of dead people all over the planet. Like billions. Probably a lot more than that, but I don’t want to sound braggy or pretentious by spouting off arbitrarily large numbers. Fine, I don’t really know the number, but it is really, really more than you could imagine without thinking about it for an amount of time that would also be so huge you really wouldn’t want to take the time to think about it, and then, well you see where that could end up going.

When Death chose a plot, he tipped the vial and let one drop of viscous, glowing purple liquid fall from the its open mouth. There was a moment of silence as time stopped and the lavender droplet fell through a vacuum of anticipation. When it finally passed through the Earth’s epidermis, there was a sound akin to a miniature, clown’s motorbike slamming its brakes on. A parade squelch of tiny rubber tires finding purchase on a summer Main Street in a small, Midwestern town. It was quite counterintuitive and very unnerving. He wasn’t sure of the physics involved, but was certain that said substance had no actual mass in this plane of existence and should therefore not make a sound at all. So the fact that it did made him question the one who had sold him the concoction. But that was a few thousand years ago and to tell the truth, he wasn’t certain if he still had the receipt, having kept it in a corked vial.

Death wondered to himself what the sound should sound like. What kind of ring it would have to have to please the ears or, at least, make sense based on the drop’s apparent liquidity and the grounds limestone mix. Like a heavy rain drop slapping some mud? A small, seedless grape being hit with a tennis racket? And if it didn’t have to make sense, as apparently it did not, then why not something more fanciful? Something like a woman’s quick, orgasmic moan, or the mischievous laughter of three dead children? Or for that fact, what about something you could actually listen two over and over again, millions of times, without getting bored out of your mind with it, like John Lennon’s Mind Games. And wouldn’t that be appropriate and fitting?

Another teardrop of magenta lightening passed from the chilly graveyard air to the casket below. Squelch!

“Fucking seriously, then!” Death raised his voice, and then quietened, looking around and feeling at once embarrassed with his outburst.

Death continued into the night. In his wake, no pun intended, the grounds began to loosen in places as the dead clawed their way from their claustrophobic, little resting places. And if you thought about like that, it was more of a rescue really.